During the International FilmForum 2018 in Italia, Dr. Jean-Baptiste Chantoiseau, Junior Lecturer in cinema Theory, Film Studies and Aesthetics at the Sorbonne-Nouvelle University and Editor of the Musée Rodin Paris, proposed a conference on Bruno Aveillan’s film: Divino Inferno. Rodin created The Gates of Hell (2017), co-written with Zoé Balthus.

The link between sculpture and cinema has already been explored by many directors throughout the 20th Century. Rodin’s statues in a startling sequence of S. M. Eisenstein’s October (1928); Greek and Roman monuments haunting R. Rossellini’s Journey to Italy (1954) or J.-L. Godard’s Contempt (1963); Rodin’s Dantesque figures inspiring dream-like images to J. Cassavetes in Shadows (1959): such stimulating examples demonstrate how the medium of sculpture has always been a fruitful source of inspiration both from a narrative and aesthetic point of view. But is it possible to evoke a “symbiotic” gathering able to change the viewer’s perception? How can filmmakers go further? To answer such a question, we will focus on a recent documentary film (2017) by the French photographer and director Bruno Aveillan: Divino Inferno. Rodin created The Gates of Hell. We would like to show how in this film the encounter between sculpture and cinema opens up a new kind of artistic space, which includes a physical and tactile involvement of the spectator.

On the right: Photo Nicolas Gouhier

This documentary offers a new kind of dialogue between sculpture, dance, photography and cinema to challenge the usual codes of art films. To do justice to the transgressive artist that Rodin used to be, Bruno Aveillan invents a new audiovisual form, melting his dancers’ bodies with Rodin’s masterpieces. Refusing the convention of the documentary genre, he includes in his film fictitious sequences to create a deep empathy with the viewer, within a synesthetic spirit in the Baudelairian sense of the word. Above all, the editing retraces Rodin’s creation process. Rodin indeed is the one who invented modern sculpture through the creation of a “unique way of re-assembling figures” as the poet Rainer Maria Rilke said. In the same way – but with other means and materials – Bruno Aveillan has decided to assemble a huge variety of images, giving birth to unexpected revelations and to a living artwork.

In choosing to place the element of fire at the very heart of his film, Bruno Aveillan can introduce and illustrate very concretely the modeling process exactly like Rodin defined it. According to the sculptor, modeling a figure should always imply a movement from the inside to the outside. Such a movement at this respect is comparable to a flame, leaping from the ground towards the sky.  Furthermore, the omnipresence of the fire creates an immediate connection, an intimacy and an imaginary possibility to attain the very essence of things: “Where the eye cannot go, wrote Bachelard, where the hand does not enter, there heat insinuates itself.” The fireplace, at the beginning of the film, is an important key to penetrate the true center of Rodin’s studio. The director creates here “a shared warmth”, a “communion in a reciprocal fusion.” It also alludes to Rodin’s « sacred fire »: when he got fascinated by a subject, Rodin was indeed capable of working with an unequaled zeal.

Another important idea: while bringing together old photographs, sculptures, drawings, fictional archives and choreographed sessions, Bruno Aveillan creates a singular editing, completely faithful to the way Rodin used to work with his “assemblage” technique; technique that he invented and would be so influential for the art of the twentieth century. Divino Inferno is an « assemblage » in itself; reflecting Rodin’s universe not only from a thematic point of view but within its own framework. This is why hands are so important throughout the movie; those hands that Art historian Henri Focillon used to compare to a “remarkable landscape with its hills, its great central depression, its narrow river valleys.” While seeing Rodin’s sculptures, “one looks for the two hands out of which this world has risen” wrote Rilke, adding “one longs to see these hands that have lived like a hundred hands”: the many hands that appear in the film evokes both the editing process and the making-off of sculpture, unifying cinema and sculpture in a same movement. 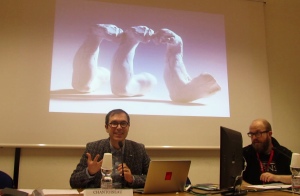 Mircea Cantor’s performance finally, who redesigned and sculpted Rodin’s Gates of Hell using dynamite on a plexiglass plate, introduces a fruitful tension between surface and relief. While inventing a modern contoured mold of The Gates of Hell, Mircea Cantor’s gesture stirs up prevailing questions such as the possibility to create a relief effect on the two dimensional space of the silver screen. While taking the imprint of The Gates, he raises as well the question of authenticity in a world more and more surrounded by images of all kinds. Acting like this, the artist seems to collect on his plexiglass The Gates’ DNA for ever; creating a bridge between the past and the present. For all these reasons, the film is faithful to Rodin’s philosophy.

“The language of this art was the body. And this body – when had one last seen it?” regretted Rilke about Rodin’s universe. This documentary strives to transform this regret into a real epiphany. The interest of such an approach is twofold: sculpture in film is no longer an ekphrasis. On the contrary, with cinematographic means, we can understand the genesis of a sculpture from the inside: the spectator is facing a mutation from the ephemeral art of the moving image to the eternity of the statue. Conversely, after watching the movie, the way we perceive Rodin’s sculpture is no longer the same, as if they were part of uninterrupted dance. Being able to capture a movement but also to liberate it: the new symbiosis that emerges from this film reshape our perception and proves the importance of this capacity for renewal that defines cinema since its beginning. 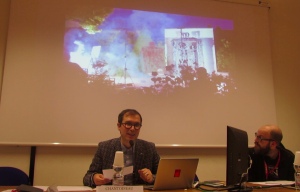